Myopia, also known as nearsightedness or shortsightedness, is a condition of the eyes in which nearby objects can be seen clearly, and but distant objects cannot. Almost a third of people in the United States experience some degree of nearsightedness.

The curve of the cornea, the clear covering of the eye, refracts (bends) light, directing it to the retina, the back surface of the eye. When the corneal curvature is abnormal, or the shape of the eye is abnormally oblong, rather than round, it is more difficult for the eyes to focus light directly onto the retina. Instead, the focus is in front of the retina. This results in blurred vision.

There is a hereditary component to nearsightedness, and individuals with a family history of the disorder are more likely to develop it. Though a small percentage of people with myopia develop a form of retinal degeneration, the great majority of nearsighted individuals have otherwise healthy eyes.

There are several symptoms of myopia. They include:

Nearsightedness most often presents when children begin school, and have difficulty focusing on the blackboard. They may also rub their eyes frequently. It may also become evident during adolescence. Nearsightedness commonly worsens for a period of years, requiring periodic changes to stronger corrective lenses, and then stabilizes in the early twenties.

Other tests performed during a full eye examination may include many or all of the following:

The refraction test, performed with a phoropter, tests the patient's vision using a variety of lenses. This is done to make sure that the correct lenses are prescribed.

Myopia is common, and usually easily treated. Patients are prescribed eyeglasses or contact lenses, both of which shift the focus of light directly onto the retina so that a clearer image is perceived. Depending on the patient's vision, corrective lenses will have to be worn during all waking hours, or only for certain activities, such as driving.

It is also possible to have surgery to correct myopia, which, in many cases, negates the need for corrective lenses. The most common surgical procedure performed to correct myopia is LASIK, during which an excimer laser is used to reshape the cornea. 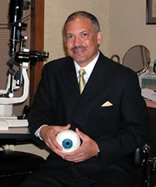 With over 35 years in private practice, Dr. Charles Hill is a Fellowship trained glaucoma sub-specialist. He has a practice concentration in glaucoma and diabetic eye care. Dr. Hill i